Where does Silent Running (1972) get its reputation and its loudly singing choir of appreciation from?

It’s a great looking film, as you might expect of the first film directed by Douglas Trumbull, previously the special effects supervisor on 2001: A Space Odyssey. Beyond that visual bravura though the film is a mess. Bruce Dern finding the limits of his range. Cute robots bumbling around. Joan Baez singing earnestly about issues with the political insight of a sock puppet, and not a particularly widely-travelled sock puppet at that. It’s an ordeal.

The worst aspect of the film though is the idiocy at work in the story. Having taken the Earth’s last remaining plants (filed away on a spaceship for reasons I have forgotten) out past the orbit of Saturn to escape the destructive plans of the authorities, hippie botanist Bruce Dern wonders why the plants begin to shrivel and die.

After much agonising he realises that they have no sunlight and that plants need light to live.

I reckon the standards must have been slipping on the day NASA interviewed him. My own botanical expertise is sparse, but I’ve got enough left over from O Level Biology to remember the whole light thing. And he’s supposed to be the botanist in charge. 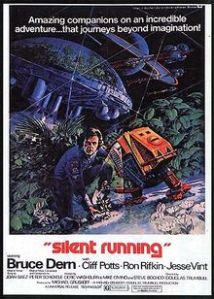 This hobbled narrative, it breaks my heart to report, was written by Deric Washburn, Michael Cimino and Steve Bochco. Washburn went on to write The Deerhunter. Cimino, in addition to his directing career, scripted Thunderbolt And Lightfoot and Magnum Force. Bochco pioneered the complex character driven, multi-stranded TV drama we thrive on today with his revolutionary Hill Street Blues.

How they fluffed it so badly in Silent Running baffles me.

It’s a film with a long shadow though. Duncan Jones cited it as an influence on his magnificent movie Moon, and Andrew Stanton credits the making of WALL-E to it as well.

Dark Star (1974) is a bit of a rickety film. Its student roots and its paltry budget are quite evident throughout. It is also very lovable though, and if its parodic nature becomes clumsily broad from time to time it doesn’t really matter because there are some very well thought-out aspects to it. Particularly pleasing is the desperate philosophical argument one of the crew has with a sentient bomb, trying to persuade it not to blow up.

The two writers behind the film were Dan O’Bannon and John Carpenter. O’Bannon went on to re-work some of Dark Star into the industrial gothic of Alien. John Carpenter, who also directed Dark Star, went on to have one of the most celebrated genre careers throughout the seventies and eighties.

There are, I think, three crucial Carpenter films: Halloween, The Thing and Prince Of Darkness.

A lot of the rest of his career is noteworthy too. Ghosts of Mars and Starman are negligible. Escape From LA and Memoirs Of An Invisible Man are actually awful. The balance though is cool beans in awesome sauce served up on a hot bed of WIN!

There are Carpenter films I haven’t seen. I will have to leave it to others to tell you whether or not In The Mouth Of Madness, Village Of The Damned, or his TV movies Elvis and Someone’s Watching Me! are any good. His three masterpieces are worth revisiting any day of the week though.

Halloween (1978) remains as terrifying now as it was the first time I saw it on TV in a house on my own. It utterly freaked me out. I was in my teens, and I still had to check behind all the furniture and curtains before I went to bed. It’s effective at a primal level. Who isn’t terrified of a blank-faced, indestructible, murderous monster? Stellar work on the character acting and Carpenter’s almost Kubrickian sense of space and its boundaries make this a film which far exceeds any expectations you can reasonably have of it.

In his version of The Thing (1982) Carpenter stripped out a lot of what lamed the (still very good) Howard Hawks version, The Thing From Another World and returned to the original source material (the novella Who Goes There? by John W. Campbell), much as the Coens have done recently with True Grit. With its ensemble male cast, Spartan environment and escalating sense of threat The Thing manages to be both a supreme thriller and at the same time a nudging enquiry into the nature of identity and how we perceive others. It’s fabulously rich in subtext.

Prince Of Darkness (1987) is a personal favourite. I love it because of its attempts to transplant and nurture a Quatermass narrative in eighties America. Basically scientists find Satan in an abandoned church in LA. If you haven’t already seen this, then please consider rooting it out. Life does not give us many opportunities to see Alice Cooper being stabbed to death with a bicycle. Here’s one to seize.

Carpenter has been quite quiet since 2001’s pretty awful The Ghosts Of Mars. He directed two episodes of the gratifyingly gory TV anthology show Masters Of Horror, but apart from that, and some writing and producing work on the joyless remakes of Halloween and The Fog he has been absent from the screen.

Which makes the appearance of John Carpenter’s The Ward pretty big news for those of us with no girlfriends and an empty Friday evening ahead of us.

But the full answer is this:

It is an old school, jump every five minutes, spooky haunted hospital, horror film. If you want mimsy stuff like character development and emotions other than the ones that sit on the spectrum between worry and terror then go and watch Rabbithole or Blue Valentine or something. This is not for you.

Amber Heard stars as Kristen, a young woman confined to a mental hospital after committing an initially un-contextualised arson attack on a farm building. As the other patients in the hospital start disappearing she becomes convinced that there is a malignant supernatural presence on the ward.

The film doesn’t really make awfully much sense, though the wrap up (dismayingly familiar from at least two other films of recent vintage) at least has a stab at closure. The shocks along the way are fun though, and as close as some of us are going to get to a full physical workout.

When I alluded to it being old school a couple of paragraphs ago I meant it. This is the sort of horror you would get in the late seventies or early eighties. It reminded me in that respect of Ti West’s under-valued 2009 film The House Of The Devil. That film was set in the eighties which neatly sidestepped the deadening narrative effect that mobile phones and the Internet can have on a story.

The Ward is set in the sixties and has a similar low-tech feel. This is a good thing. 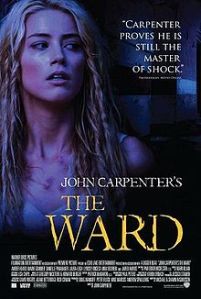 If like me, however, you’ve got Carpenter love going on then you will not begrudge the hour and a half it takes to get from the establishing steady-cam prowl through deserted corridors to the closing credits.