At the outset of Richard Lester’s magnificent, lumbering Robin And Marian (1976) Robin Hood and Little John return from an ignoble post-Crusade adventure to England, their home. Both are grey in the muzzle and their best is manifestly behind them.

There is lurking, unfinished business with Maid Marian, the Sheriff of Nottingham and King John, and a melancholy air pervades the whole enterprise. The abiding theme of the film is of people in the late stages of their lives attempting to redress balances, pay back debts and set right wrongs before the inevitable end.

The cast is cosmically good. Nicol Williamson as Little John, Robert Shaw as the Sheriff, Ian Holm as King John, Richard Harris as King Richard, Denholm Elliott as Will Scarlet, Ronnie Barker as Friar Tuck. But it is the title characters, played by Sean Connery and Audrey Hepburn that the story mostly concerns itself with.

Their re-acquaintance with each other, and the slow, honest exploration of what they had, what they lost and what they have left is delicate and convincing and has great emotional mass, I feel.

There is something overpoweringly sad about the indignities of the passage of time. However great one’s achievements are, they pass. The lone and level sands stretch far away. Vast and trunkless legs of stone? You’d be lucky, mate.

And that’s Robin And Marian for you. Two once great figures reduced and senescent, and waiting for the sunset.

The film has a terribly sad ending.

What wistfulness this has wrought within me, I thought poncily as the credits rolled.

There is no way I could possibly feel more wistful than this, I continued to think. Like a git.

Then I discovered that at the time of filming both Connery and Hepburn were younger than I am now and I had to have a bit of a sit down.

What happens in life is you stand still and the sandbank erodes in front of you. People fall in the water and are gone. More sand accretes behind you and people clamber on, but you don’t get to know too much about them as you get nearer the falling off point yourself.

More than usual of late I have been aware of dim but constant lights in my life winking out and not being replaced. Of the texture of life changing, and not for the better.

The TV and radio news is a constant low, unsettling hum, set to unbalance rather than to panic.

The revoltingly wealthy are cutting themselves tax breaks because too much money is not enough for them. At the same time the vulnerable, the ill, the unfortunate are being dehumanised and blamed.

A national agenda of selfishness is kicking the cock off neighbourly love.

The regression towards barbarism is accelerating. The howls are drowned out by auto-tuned product that is to music what KFC is to chickens.

I feel, for want of a better word, sad. Also angry and powerless.

This is the problem. What, then, is the solution?

It is, for me, to get into a bit of action. Hold out a hand for someone who needs it. Talk to a person who looks like they want a chat. Do the stuff that is in front of me. Change what can be changed, and work hard at accepting that a lot of things are beyond my ability to affect.

Oblivion is easy but unhelpful, and anaesthesia is not my friend. Thus my old familiar comforts are things I view with some suspicion today.

So, what of Doctor Who? This is a programme which has been uninterruptedly in my life since 1971, my first clear recollection of it being The Daemons. Since then I have embraced it all, loving it for its awkward spikiness and its insistence, year after year, of embracing the outsiders and conferring a sense of fellowship on those to whom interpersonal niceties do not come easily.

Am I hiding behind Who today? Am I using it to distract myself from the moral abattoir of UK politics, and the insane galloping selfishness of the world?

But I will say this.

There is nothing snarling, sarcastic or judgmental about the show. Its values seem solid to me. Love, compassion, tolerance. That’s the stuff I find in it which I don’t see in The X Factor, Downton Abbey, EastEnders, Deal Or No Deal, Broadchurch, Embarrassing Bodies or any of the other million shrieking, brow-furrowed incitements to hatred that are jizzed incontinently across the schedules.

The most recent episode of Doctor Who, The Bells Of Saint John, was preceded by an almost unbearable swell of badly articulated anticipation, a lot of it on Twitter, most of it in capital letters.

The fan reaction to the show is not the same as the show however, and it is a basic category error to review the one under the guise of reviewing the other.

The episode itself was, I thought, pure, glittering essence of modern-era Who. After a rousing new reinterpretation of the theme tune – less orchestral now, more like The Crunch by The Rah Band – the story kicks off more proactively than it has done for a while. The Doctor takes a positive, practical, moral stance against an entity which is harvesting human souls. He uses the antagonist’s own weapons against it, ingeniously I thought, and restores a righteous balance as best he can with the help of new companion Clara Oswald.

There are aspects of The Bells Of Saint John which are amusingly familiar to viewers of the last few years’ worth of stories. The TARDIS telephone evokes memories of The Empty Child (2005). The mobile base stations known as the Spoonheads are distant cousins of the Nodes from Silence In The Library (2008) and the Smilers in The Beast Below (2010). But, beyond this, writer Steven Moffat also homages some great early era stories too.

The Great Intelligence’s commandeering of Wi-Fi networks is a puckish reference to The Web Of Fear (1968). The Doctor’s monastic seclusion in thirteenth-century Cumbria provokes comparisons with The Time Meddler (1965). Most splendidly though the whole story is a huge love letter to the William Hartnell episode The War Machines (1966) with The Shard standing in for the Post Office Tower.

Spotting these is fun for the fan, but is not essential for enjoyment of the story. That remains a tight 45 minutes of movie-spectacle on telly-money. There’s good writing and some ace Tommy Cooper-esque physical comedy. I was particularly fond of Matt’s phone cable foolery and subsequent monkish channelling of Exidor from Mork & Mindy.

The rapport between Matt Smith’s Doctor and Jenna-Louise Coleman’s winsome teapot Clara is a joy, particularly after the prolonged and baffling Pond saga.

And importantly there are enough unanalysed enigmas left to make the journey to November’s fiftieth anniversary special look particularly exciting. Clara seems to have two years missing from her life. And what of the mysterious helpline woman, and the even more mysterious Nina?

And does the Eleventh Doctor’s purple wardrobe reflect the end of an era, the way Tom Baker’s burgundy raiment did thirty-two years ago?

We are lucky to have this. It’s good.

You can download for free the podcast commentary I recorded with Lawrence Sutcliffe at:

iTunes – The Bells Of Saint John

Podbean – The Bells Of Saint John 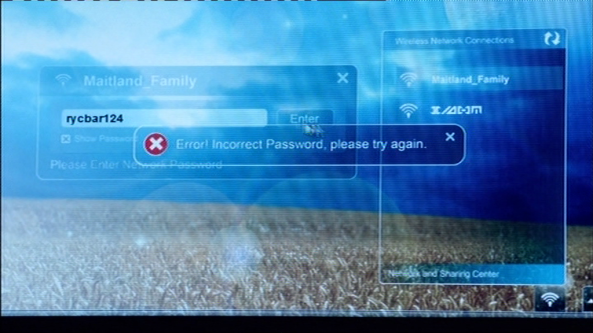 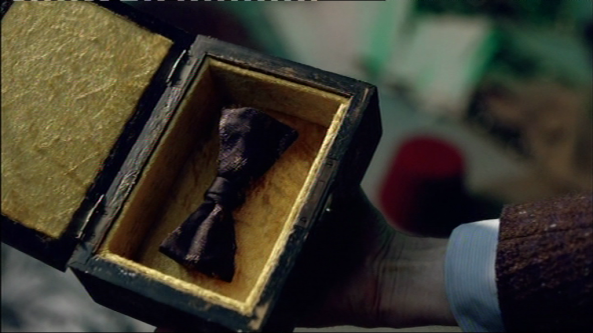 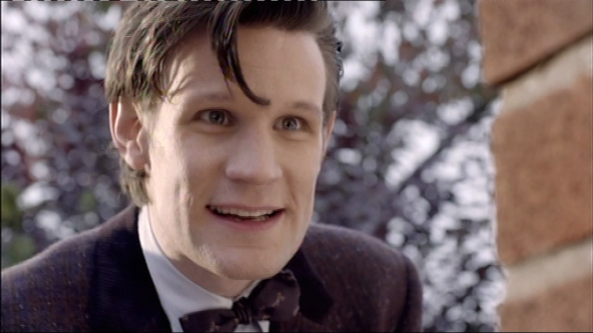 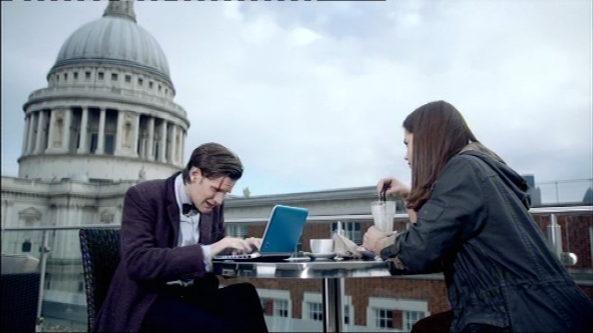