Where do you stand on the controversy controversy? Do you pronounce it controversy or controversy? I mix it up about 70/30. Well, more accurately 69/29 because occasionally I take it off-road Mexican style and make the final vowel sound last as long as I can. Controverseeee.

Right. Do we all have our entrenched “controversy” positions sorted out? Excellent. Then let’s start an angry dialogue on all available broadcast and social media with weapons-grade invective. Well I say dialogue, but that’s not really the right word because we won’t be listening to anyone else’s point of view and adjusting our own according to what we hear. Nah, we’ll just be shouting out our own opinions with all the sanctimony and self-righteousness we can muster until our faces turn a festive shade of red and the veins in our temples are throbbing to the tempo of The Little Drummer Boy.

Anger is such a cheap commodity.

On an entirely related matter I think Jeremy Clarkson is a gormless boor with a rhetorical arsenal of about three tricks. But that’s just my opinion. Others are available.

His employers (the Beeb, The Sun, The Sunday Times and Penguin) pay him to be a contrarian and a controversialist, so is it a massive surprise when he says something incredibly offensive about striking public sector workers on live telly? No, I’d have thought. And happily we are all grown-ups here. We roll our eyes and we move on, surely.

As I type we are 48 hours past the actual remarks themselves but they are still fermenting away in the UK news bucket. Thousands of people are spouting off. Many of the ones most vocally involved have had to go to the trouble of looking the clip up on the internet to find out exactly what it is that they are so offended by. Did he go too far? Have we all lost our senses of humour? Who is it OK to shoot again? I lost track during all the shouting.

I have worked in both the public and private sectors and I am currently self-employed. I have three separate and mutually contradictory opinions on the matter of public sector pensions. That’s a lot of opinions for a small brain and it has become quite confusing. Perhaps I’ll just shoot everybody and then get about the more serious business of cramming mince pies into the food hole in the front of my head.

This keeps happening. Frankie Boyle alluding to kids with Down’s syndrome in the course of what was admittedly a very dark comedy routine. The depressingly basic debate between the fans of Richard Herring and those of Ricky Gervais about the rightness or wrongness of the use of the word mong as a term of abuse.

Somebody says something. Someone takes exception to it. And so degraded are the processes of discourse currently that before you know it you have vast armies standing on hills shouting at each other, comparing each other to Hitler and seriously talking about people getting shot.

Enough with the bipolar flight to the extremities. There’s a whole fertile middle ground of non-judgmental personal responsibility just waiting to be explored here.

I blocked someone on Bookface once because they posted a string of jokes using the racially charged P-word. I don’t think it was necessarily wrong of them to use the word but it would definitely have been wrong of me to tolerate it.

Antithetical points of view. A parting of the ways. Number of people shot: zero.

I remember Charlie Brooker once writing very perceptively about his own involvement in a similar situation. As I recall it he’d written a piece about the televised US Presidential debates in 2004 which ended with an invitation to, I think, either John Wilkes Booth or Lee Harvey Oswald to involve themselves. Unfortunately this article was published with a flourish on the Guardian’s internationally accessible website. The result was that Brooker was bombarded with a shocking quantity of hate-filled and murderously angry transatlantic emails some of which he published.

I sided then, and side now, with Brooker on this one, though I can see how offence was there to be taken. But once I’ve done that how can I then complain about Clarkson crassly doing the same thing albeit from the other end of the political spectrum? I can’t really.

Peace on Earth, good will to men.

Before moving on entirely from controversy let us tarry just a little while to gawp at the rank, festering, open wound of a film that is Charles Sellier’s Silent Night, Deadly Night (1984).

The plot is this: traumatised as a child by the murder of his father and rape and murder of his mother at the hands of a criminal in a Santa suit young Billy grows up to be a psycho killer triggered by the sight of people having sex at Christmas.

The movie has some lingering notoriety based on the hostility that greeted its original release. The outcry was centred on the unacceptability of having a psycho dressed as Santa, though the outcriers seem to have been entirely unfussed by the release of Lewis Jackson’s Christmas Evil four years earlier.

Silent Night, Deadly Night wasn’t even put forward for BBFC certification until its eventual 2009 DVD release, nevertheless it has a reputation for being a video nasty. As with so many of the movies that were on the Nasty list it’s hard to see now why people were so exercised by it. Tasteless it may be, but its capacity to pervert is minuscule.

Tastelessness isn’t the worst of SNDN’s shortcomings. It is pedestrian, drab and disastrously unthrilling. Bearing in mind that it culminates in an axe-wielding Santa confronting a nun in a wheelchair in an orphanage full of kids the movie is surprisingly light on jeopardy. The acting is poor. The tone is uncertain. The moments of competence, like John Wayne’s knees, are few and far between. In fact it was only when I tried finding a few shots to screen grab that I realised just how badly mounted the whole exercise is.

Best I could do is the not very legendary snowman decapitation sequence. Try not to have nightmares. 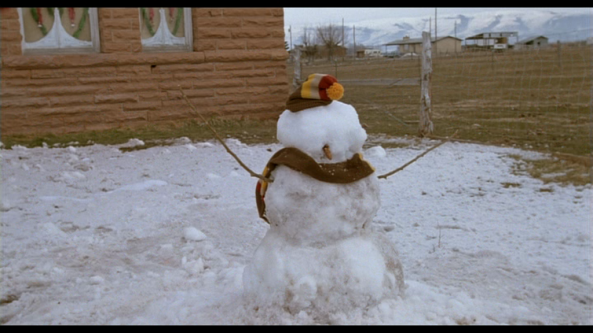 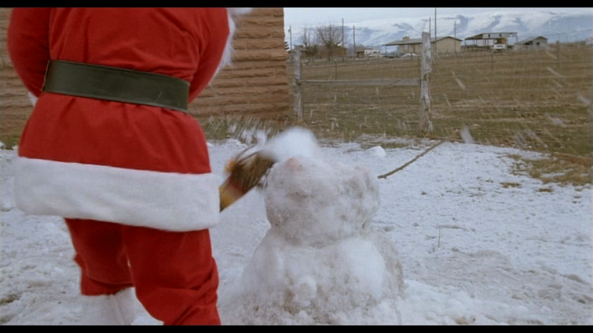 Mindbogglingly there were four sequels, none of which I have seen. I am led to believe that SNDN 3: Better Watch Out! stars Richard Beymer and Eric Da Re from out of off of Twin Peaks and was directed, heart-breakingly, by Monte Hellman who made the awesome Two-Lane Blacktop in 1971. Can this be true?

Several orders of magnitude better, but still not awfully good, is Bob Clark’s Black Christmas (1974). Clark would go on to direct Murder By Decree with Christopher Plummer and James Mason as Holmes and Watson investigating the Jack the Ripper murders. I remember it fondly, but it is several decades since I last saw it. He also directed Porky’s in 1982 which wiser men than me have found merit in. I found its bawdiness a bit wearing however.

Black Christmas has a couple of ticks in the credit column. It’s an early entry, possibly the first, in the calendar horror sub-genre which would really take off after Halloween four years later. It also has a fine cast including the sultry Margot Kidder (soon to be Lois Lane in the Superman movies and sole good reason for watching The Amityville Horror), and Keir Dullea star of not only 2001 but also of Noel Coward’s brutal “Keir Dullea, gone tomorrow” put down.

The story is a slender bit of urban mythologizing: girls disappear one at a time in a sorority house over the festive period. There are anonymous phone calls which may or may not have something to do with it. It’s a bit twistier than you might expect but dull to look at and shrill to listen to.

There was a remake in 2006 about which I cannot speak with any authority at all.