The Pandaemonium of Brians is a scary place near which to find yourself. Sewell, Dowling, Dennehy, that thick cheery gastropod from off of The Magic Roundabout, they are all there. Bryan Adams too at a push. Also among the more daunting, and less cherishable Brians, is Brian De Palma, Catholic mathematician, big bushy beard wearer, and director of really REALLY loud movies.

There are, rightly or wrongly, respected films in De Palma’s work: Carrie, Blowout, The Untouchables, Casualties Of War, Carlito’s Way and Mission: Impossible; and I think there are merits in a lot of his misses.

Sisters elicits a magnificent couple of turns from the sainted Margot Kidder. Phantom Of The Paradise lopes merrily along, high on its own narcotic lunacy. Dressed To Kill has an achingly lovely Pino Donaggio score and, that rara avis, a good Michael Caine performance from the eighties. The Fury is a spirited attempt to recapture the éclat that Carrie had but suffers from the wayward plotting of John Farris’s original novel and the what-the-hell-were-they-thinking casting of Kirk Douglas (62) as the boyfriend of Carrie Snodgress (33). It’s as uncomfortable a partnership in its way as Roger Moore and Grace Jones in From A View To A Kill and, er, Kirk Douglas and Farrah Fawcett in Saturn 3.

The less said about de Palma’s Bonfire Of The Vanities, Mission To Mars and Snake Eyes the better, and, as I am sure I have muttered darkly before, his spavined adaptation of Black Dahlia is exactly the sort of film you would get if you showed a bunch of kids L.A. Confidential and then got them to play “cops and other cops” in the playground the next day.

(Do kids still have playgrounds? I am old and out of touch and will mercifully be dead soon.)

Black Dahlia is a particular disappointment as the James Ellroy novel whence it sprang is one of my favourite books. Steeped though they are in Hollywood lore and the occult aspect of West Coast history, Ellroy’s novels are far too finely characterised and abundant in narrative detail to make for good movies – and if you think Curtis Hanson’s L.A. Confidential is a good movie then read the four Ellroy books of which it is the third volume to have the film’s comparative moral and intellectual weediness exposed.

Out of all of De Palma’s oeuvre though the most culturally significant film he has made seems to be Scarface, and for those of us who were around to see it on its first release in 1983 this is considerably surprising.

Principal among its many obvious faults are the facts that the film, scripted by Oliver Stone with his customary lightness of touch, has no likeable characters and surprisingly few actual events for something that demands near enough three hours of your time.

According to popular legend novelists John Irving and Kurt Vonnegut both walked out of the premiere in disgust during the chainsaw sequence which occurs quite early on. At the same showing lovely, cussed old Dustin Hoffman is alleged to have fallen asleep.

Perhaps we were all a bit too close to it then to see it for what it actually is though, because the passage of time has been very gracious to Scarface. The film remains a cold-blooded, borderline reptilian celebration of the pursuit of money and power, but that seems cleverer now than it did in 1983.

At the time the film’s very few adherents saw it as an indictment of the new Hollywood.

To put it in context 1983 had seen the release of some genuinely good films: Zelig, Koyaanisqatsi, Videodrome, The Hunger, The Right Stuff, Local Hero, there are more I bet. You fill them in. It had however also been the year in which the highly unnecessary sequel had become an acceptable part of the cinema landscape: The Sting II, Psycho II, Porky’s II, Superman III, Staying Alive, the battle of the geriatric Bonds with Octopussy versus Never Say Never Again, and, most ominously, the dead-eyed two hour marketing opportunity that was The Return Of The Jedi. And yes, I know that Psycho II is an epic bit of retro-fitted storytelling but that isn’t, I think, what was foremost in the minds of the money guys when they gave it the green light.

What Scarface symbolised at the time for those smart enough to read it (not me I must emphasise since I was then, and remain now, as thick as fudge) was the changing of the movie industry guard. Out with old-fashioned stuff like actually having ideas, character and plot, and in with the new cash-flashing, drug-chugging, bottom-feeding rippers-off of everything that had gone before.

To the experienced eye Tony Montana’s negotiation of a seventeen million dollar drug deal whilst in possession of little other than his tight white disco suit and colossal personal swagger was highly reminiscent of the talent-free producers swarming through Hollywood at the time like cock-a-roaches, but cock-a-roaches who could spin air into gold.

(And for the dedicated here I wholeheartedly recommend Charles Fleming’s brilliant book High Concept: Don Simpson and the Hollywood Culture of Excess which is as perspicacious an indictment of that era as can be expressed using the medium of language.)

Twenty-eight years on and time has deposited layers of irony on Scarface’s existence. It has, for example, been embraced by the hip hop community, whose accumulation of brand name trappings and affection for homicidal carnage provides a jaunty backdrop for a genre of music which was, originally, born of genuine anger at social injustice but now represents the nadir of conspicuous consumption and aspirational inanity. A hymn to the grim, top-end Argos catalogue of expensive things that premier league footballers think they like.

Scarface goes to very great lengths to show the futility of the progression from hungry achiever to bloated pig. Several times during the story’s progression we have our attention directed towards characters who have more than anyone could want or use, but who are still joylessly dedicated to the accumulation of more.

It’s almost readable as an anti-consumerist parable, but as with so many enterprises whose irony is lightly worn that irony is lost on most of the audience.

More money? Faster cars? Thinner women? Bigger guns? Mountains of cocaine on your massive desk in your massive mansion? Yes please. And then some more if that would be OK.

So, a warning from the past to the future, or a crass celebration of excess? The choice is yours.

What is undeniable is that in the quarter century plus since its ignominious opening and subsequent poor reception Scarface has become one of those hits that hit rather heavily.

Two of its lines for instance have become globally, and frequently incorrectly, quoted:

“Say hello to my little friend!” which, frankly, lacks real impact if you’re not actually toting an M16 with the M203 grenade launcher attached as you shout it.

In a shopping centre.

A gun or something earlier today

A number of video games are in debt to the movie too, most notably the Grand Theft Auto series which can leave the nerdy types slightly anxious during the film as they are unable to direct the characters and vehicles using a PS controller. I speak from personal, tragic, lonely experience.

Anyway Scarface is newly out on Blu-ray and this is the first time I’ve seen it in some years. As I’ve previously suggested I think that history is a friend of the movie. What seemed garish and ham-fisted at the time now looks pretty authentic.

This isn’t the early eighties as vaguely imagined by someone who wasn’t born at the time and processed through the numbing mills of the CGI factory. This is the eighties as it actually was. You could buy Quatro in cans and watch Michael Elphick in Private Schulz on the telly when this was being made.

The performances are genuinely great. I’d previously dismissed Michelle Pfeiffer’s performance as Elvira as being a bit bland, but it’s actually a hellishly accurate portrayal of a flint-hearted, unscrupulous woman on the make. All the supporting actors (including the slippery, elusive F. Murray Abraham) are impressive. But it is on Al Pacino’s performance as Tony Montana that the whole film stands or falls. 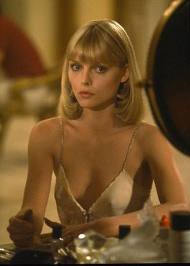 A picture of a flint-hearted, unscrupulous woman. You know, just in case you never see one in real life

Opinion at the time was largely negative. Pacino’s mannerisms and accent were seen as broad caricature. Worse, there was a creeping liberal dread that it might actually be a bit racist, bordering on the regrettable tradition of blackface. This kind of thing had still been acceptable on British TV until comparatively recently. The Black and White Minstrel Show ran, embarrassingly, until 1978. It was still no big deal to have Michael Bates playing Rangi Ram on It Ain’t Half Hot Mum, and Michael Spice as Weng-Chiang in Doctor Who in the late seventies, but attitudes were changing.

Now, culturally insensitive boor I may be, but I am sympathetic to people’s offence at this sort of thing. Still I do have to confess that it doesn’t actually ruin my day to see someone playing a race, nationality or gender that isn’t their original one if the intention is clearly not to demean or patronise. It’s not Anne Hathaway’s Yorkshire accent that is keeping me away from One Day for example. It’s the fact that I am a boy rather than a girl.

Actoring isn’t generally a hate crime. It’s just dressing up and pretending. And to this end Pacino is a brilliant Tony Montana. He is rarely off the screen, and his initial sangfroid and its gradual mutation into cocaine psychosis is fabulous to behold.

Ultimately though the filmmakers were touchy enough about the idea of alienating a whole slice of humanity that they appended the following lily-livered disclaimer to the end of the movie. 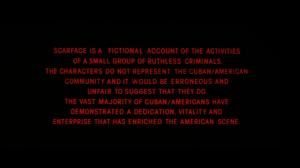 I don’t know about you, but I find the phrase “enriched the American scene” a bit of an unconvincing one.

The transfer of Scarface to Blu-ray is fantastic. As I seem to be finding over and over, old movies shot carefully on proper film make for sumptuous hi-def experiences. I recommend this with some vigour, but only to those with affection for the amorality of the era and tolerance for bass-bothering Giorgio Moroder music.