And that’s not just me saying that, it is also the Managing Director of the last UK High Street bookshop chain standing, Waterstone’s. His name is James Daunt, which would be pretty good if he was a dragon-fucking Nord in Skyrim (“I used to be an adventurer like you. Then I took an arrow to the knee.”) but is positively ace given that he’s just a peevish man who works in a shop.

Daunt is reported to have said of his most high profile online competitor Amazon, “They never struck me as being a sort of business in the consumer’s interest. They’re a ruthless, money-making devil.” Defending the high street model of retail he elaborated, “The computer screen is a terrible environment in which to select books. All that ‘If you read this, you’ll like that’ – it’s a dismal way to recommend books. A physical bookshop in which you browse, see, hold, touch and feel books is the environment you want.”

My two issues with that last statement are firstly that a computer screen is actually quite a convenient and cosy way of shopping (and the coffee is way cheaper), and secondly, please don’t fucking tell me what I fucking want, you patronising prick.

I was a bookseller for Waterstone’s from 1993 to 2008 and it was a great job. During that period however retail changed drastically, and by the time my branch closed down, largely a victim of a vast branch of Borders teleporting into town, the notion that a building made of bricks with a bunch of speculative stock in it was somehow better than the whole of the internet was already looking a bit Last Millennium.

The big branch of Borders also closed down not long after to my chagrin. Competitors they may have been, but they were good and a lot of their staff were fine, knowledgeable booksellers.

So my home city has, effectively, one bookshop now. It’s a branch of Waterstone’s that used to be an Ottakar’s. It’s a lovely branch in fact with a phenomenal set of booksellers. If you’re ever in town tell them Feexby sent you and Toby and Terry might put on their special show for you.

Anyway I happily buy all my books there when possible, but there are times (like two o’clock in the morning) when this just isn’t going to happen. And at times like that it’s hard to have a bad word to say about Amazon.

I don’t find Amazon ruthless. If anything I think they are quite service-orientated. I once had to return a damaged DVD out of a huge box set and their returns procedure was magnificent. I’m sure they are out to make money, but they do it in a way that suits me just fine. Also their recommendations aren’t dismal. They are pretty well executed. They are certainly better than any of the staff recommends cards I ever wrote in my bookselling days.

The internet isn’t going to get switched off any time soon. This change has happened. Sorry you don’t like it Daunty but shouting at a tidal wave is just going to get you soggy.

What was that for? Oh yeah. The creeping horribleness of change.

It turns out you can’t buy It’s A Wonderful Life anymore without getting both the original proper version and the “colorized” version too. This happened also with my bewilderingly comprehensive Laurel and Hardy collection and to be absolutely straight with you, I don’t like it.

Colourisation isn’t quite painting bunny ears on to the Mona Lisa, but it ain’t far off. Can we not just leave stuff the way it was made? This isn’t good change. This is bad change. I don’t know anyone who prefers the colourised versions. And whilst I’m astride this hobby-horse: Filmmakers, please don’t digitally remove cigarettes from cartoons; please don’t get all coy about racial attitudes in films made eighty years ago; and pretty-please stop trying to shoe-horn an extra dimension in to movies that were previously quite happy being flat.

What is left to be said about Frank Capra’s enduring Christmas classic It’s A Wonderful Life, the black and white version? Well not too much by me, though it surprised me once again this time round that, for a film whose reputation is that of the ultimate feelgood flick, you have to get through a lot of misery for a pretty perfunctory ascension.

The movie is over two hours long but it isn’t until the 100 minute mark that George Bailey, played with awkward amiability by James Stewart, finally gets round to attempting the suicide that is alluded to in the opening scenes. He has gone through a lot by this stage, but is dissuaded from the final sanction by a bumbling learner angel who shows him how wretched the world would have been if he’d never been born.

Bailey repents. Reality reasserts itself. There is a Christmas miracle of overwhelming neighbourliness, and it’s all rather wonderful if a little rushed at the end. The fromage factor is high, but the sincerity of everyone involved carries it with grace and dignity. The lesson we learn is that the best things in life aren’t things.

I’m not sure about the theological aspects of the story though. Heaven seems to allocate its agents with an appalling disregard for their ability or otherwise to do the job. Also the angels in discussion at the film’s outset are depicted as spiral galaxies and everyone knows that spiral galaxies are just made up things used to inculcate obedient behaviour in children.

Five years prior to It’s A Wonderful Life Frank Capra had directed another seasonal heart-tweaker, Meet John Doe (1941). This has Gary Cooper as its lead, and (personal opinion klaxon) I have to admit that I find him quite a deadening presence in a film. To counterbalance this though the female star is the magnificent Barbara Stanwyck. You know me and my taste in women, mad and beaky.

Stanwyck plays Ann Mitchell a columnist facing the chop from her newspaper in the name of progress. Many of the film’s themes have an amazing contemporary resonance like this. The opening shots of the movie are of the old paper’s sign “A free press means a free people” literally being drilled to bits and replaced with one saying “A streamlined newspaper for a streamlined era.”

Pissed off at her redundancy Mitchell writes one last column, a faked letter from “John Doe” in which this fictional character threatens to commit suicide by throwing himself off City Hall on Christmas Eve as a protest against the social injustices in the country.

The editor becomes convinced that there is profitable mileage in this. He retains Stanwyck and together they recruit a bum from the streets, down on his luck baseball player Long John Willoughby (Cooper), to play the part of John Doe.

As a result of his ghost written columns and radio appearances John Doe becomes a legend. Grassroots John Doe groups espousing neighbourliness (a consistent Capra theme) spring up. Willoughby starts to believe his own legend and Mitchell falls in love with the character they have both created. The rational Jiminy Cricket-like conscience character played by the lovely grizzled Walter Brennan is increasingly sidelined. 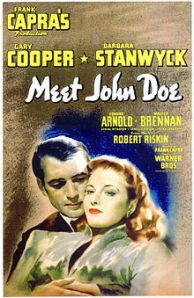 Things take a turn towards the dark though when it turns out that the newspaper’s proprietor is planning to take the John Doe movement and turn it into a political third party. Willoughby can’t stand the thought of this idealistic movement being prostituted thus and tries to thwart the scheme by exposing himself as a fraud. He fails and, alone on Christmas Eve, decides to commit suicide. This act (prevented by Ann who genuinely loves him now) convinces the people that the principles of the John Doe movement are worth preserving even though they sprang initially from fraudulence and greed.

The manipulative newspaper proprietor is left powerless at the hands of the people. Apart from a single lurching, unwelcome allusion to the death of Christ this is rousing stuff. A sparky depiction of how the juggernaut of political ambition can fail before the apparently feeble forces of moral correctness. I love this. It’s not that far away from the denouement of Capra’s 1939 film Mr. Smith Goes To Washington, or the Stackhouse Filibuster episode of The West Wing. Or the ideologies of Wolfie in Citizen Smith. (Not really that last one.)

I don’t see this on many lists of Christmas films, but there should clearly be a place for it in the pantheon.

Right message. Right time of year. And, like Die Hard, it ends with Beethoven’s Ode To Joy from the end of the ninth symphony.