The Man Who Fell to Earth – Bowie has never been better cast than as the isolated alien Thomas Jerome Newton. Nicolas Roeg turns a comparatively linear Walter Tevis novel into a fractured delight in which you get the narrative components in the order of their relevance. Roeg’s films of this period are often praised for their artistry. The craftsmanship is also of considerable éclat.

Martin – An almost gentle movie from zombie auteur George Romero. This is an alternative, acutely psychological take on vampirism.

The Medusa Touch – In the wake of The Exorcist and The Omen, but before the gonzo Italian rip-offs like Holocaust 2000, came this understated British thriller with an on-the-skids Richard Burton as a misanthrope with a destructive telekinetic gift.

Network – If you see the word Network and your mind instantly comes up with the phrase “I’m mad as hell, and I’m not going to take it any more” then it is no wonder that we are friends. Watching this 1976 news satire and reading Neil Postman’s book Amusing Ourselves To Death will take you a huge distance towards understanding today’s media. 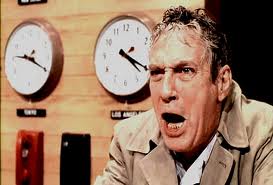 Never Say Never Again – The “unofficial” Bond film people talk about even less than the sixties version of Casino Royale. It’s a remake of the problematically-copyrighted Thunderball in which Connery, wrinkly and be-toupeed, reprises his 007 role charmingly. There are lapidary script embellishments by Dick Clement and Ian La Frenais, and an appalling Rowan Atkinson cameo, but it still all works. “Oh I’ve made you all wet,” apologises Kim Basinger arriving on water-skis. “My martini’s still dry,” retorts Bond.

Oasis of Fear – A swinging London Italian sexploitation thriller from 1971. It stars the beautiful Ornella Muti who went on to play Princess Aura in Mike Hodges’ Flash Gordon.

Our Man in Havana – So how does this work? You take the writer (Graham Greene) and director (Carol Reed) of one of the greatest films of all time (The Third Man). You cast Alec Guinness, Ralph Richardson, Noel Coward and Maureen O’Hara. You light the touch paper, stand back and… Fizzzzzle. Phut. It’s certainly worth watching, though the humour is a little forced. Specifically though it’s a lesson in how unpredictable cinema alchemy can be.

Outland – High Moon we called it. We were funny in the early eighties. Sean Connery takes the Gary Cooper role as the only law, albeit on Io rather than Hadleyville. Director Peter “steady hand on the tiller” Hyams also directed Capricorn One and 2010. Oh, and Timecop.

Phantasm – A macabre, lurid tale of a funeral parlour which is home to a ghoulish tall man, a portal to a hellish dimension and a bunch of flying, blood-sucking silver fears. I don’t think I sold that well, but this and its three sequels are disconcerting, threatening and fun.

Primer – Hardcore, no-prisoners-taken time travel without the paradoxes genius. The unfolding of the plot in mumbled, tech-heavy jargon is fantastic. The understatedness of the whole thing really works in its favour. Short but incredibly intense. A movie triple espresso.

Prophecy – High energy occult pantomime starring an exultant Christopher Walken as the arch-angel Gabriel. Walken also starred in two of the sequels, Prophecy II and Prophecy 3. It is in keeping with the movies’ skittishness that the makers can’t even be consistent about whether to use Roman or Arabic numerals. Fun though. Certainly much more fun than last year’s po-faced Legion which trod similar ground.

Psycho II – There are three sequels to Psycho. Psycho IV is a disappointing, but watchable, prequel. Psycho III is a sleazy piece of brilliance directed by Anthony Perkins himself. But this is my favourite. Left in the hands of Australian Hitchcock fan Richard Franklin, who had previously directed the magnificent movie Road Games, this unloved bastard child became a surprisingly inventive, but respectful, thriller.

Q – The Winged Serpent – Aztec flying serpent god Quetzalcoatl has made his home (undetected) in the roof of the Chrysler building and is terrorising New York rooftop sunbathers. Mad, mad, mad as you like. It’s got Richard Roundtree and David Carradine in it, but it is Michael Moriarty’s loony performance that binds it all together.

Excuse me, mate. Have you got any fire? - RDC rocks the Palaeolithic era.

Razorback – Brightly lit Australian version of Jaws with a giant pig instead of a shark, and set in the outback rather than at sea. Lush. Flamboyant director Russell Mulcahy had previously directed Wild Boys and many other Duran Duran videos. He went on to direct Highlander and Highlander II.

Red Dawn – A staggeringly offensive lump of Reagan-era right wing political naivety. Mainland USA is invaded by the USSR and its allies. Patrick Swayze, Charlie Sheen and C. Thomas Howell lead the resistance. John Milius gets credit for the sheer balls-out swagger of the film. Wolverines!!

Right at Your Door – LA suffers a dirty bomb attack. Brad seals himself into his house with his neighbour’s Mexican handyman. When Brad’s wife returns to the house asking to be let in a standoff ensues. This is a textbook example of how to extract the maximum tension from a limited budget and just three main cast members. There’s a pleasing twist towards the end too.

Runaway Train – Thundering good action movie, with a nihilistic edge set on… Well guess. Did you say a runaway train? You are correct. Jon Voight and Eric Roberts star. It’s based on a script, and I still find this hard to believe, by Akira Kurosawa.

Safe – Being a Julianne Moore fan will take you to some strange places. Shelter? The Forgotten? Blindness? Sheesh. However she is an amazing actress and this is one of her overlooked masterpieces. She plays a woman who gradually becomes allergic to everything and ends up living in a porcelain igloo in the desert. A to the R to the T.

Save the Green Planet – Byung-gu kidnaps the CEO of a chemical company, convinced that he is the leader of an alien invasion from Andromeda, ties him up and proceeds to torture him. An off-its-meds South Korean sci-fi/horror/comedy of considerable achievement.

Streets of Fire – Walter Hill’s musical, or rock and roll fable as he preferred to call it. Jim Steinman contributed some of the songs so there’s a ponderous air to it, but the look is overwhelming and the movie thrives on its comic book-style wipes between scenes.

Triangle – Marketed as horror, this is certainly an unnerving film but there is so much more to it than that. Inventive, convincing and ultimately agonising this remains to date the only film I have ever seen to be explicitly based on the myth of Sisyphus.

Twin Peaks: Fire Walk with Me – Has there ever been a bigger Fuck You than this? Taking a lulled TV audience who only wanted a resolution to the Black Lodge/White Lodge stuff from the end of Twin Peaks season 2, David Lynch instead provided them with the artistic equivalent of baring his bottom through a window. An unwished for prequel that entirely resists interpretation. It is brilliant.

Wolfen – Ah the early eighties. So much werewolf action. Eschewing the conventional lycanthrope trappings, so brilliantly subverted in The Howling and An American Werewolf In London, this instead goes for a Native American myth. It is based on a novel by Whitley Strieber (the anal-probe fetishist’s answer to David Icke). Albert Finney stars as a New York cop. It was only director Michael Wadleigh’s second film, his first having been Woodstock twelve years earlier. There is some high quality severed head action.

Zombie Creeping Flesh – Euro-zombies! This starts with an undead rat in a chap’s biohazard suit and ends mid-chomp in a full-on zombie rampage. In between is all manner of absurd dubbing and arbitrary shocks. The zombies are old-school shufflers so there is a lot of standing-still and running-slowly action. The music is by Goblin.

And so there we have it. 72 films that are effortlessly better than Avatar – obviously I didn’t think it through or I’d have chosen 75. That’s the trouble with the top of my head. It has the worst ideas.

There are millions more, but I’m not sensing an appetite out there for it.

Just one final thought: I have proved scientifically, by imagining it pretty much to be the case, that you could make all of the films I have written about for less than the cost of one Avatar.

Mind how you go now.