“Thank you, no,” I said after the tiniest amount of reflection. “I am fine for chocolate. Just the paper and the petrol please.”

The woman behind the counter beamed a genuine beam. Not a faux, retail blandishment. An actual smile.

“That’s you medical students,” she said. “You know how bad it is for us.”

“Nah,” I retorted. “I’m pretty sure chocolate’s one of your five a day.” A weak joke. Almost so weak as to be not worth saying, but I needed to say something. A social obligation had been laid in front of me.

Anyway she laughed. I kept the wan smile on my face even though I was beginning to feel the musculature around my mouth, a sure sign the smile did not look genuine.

I paid for my petrol and drove the remaining couple of hundred miles to Leeds aware that something had happened that I did not understand.

Nothing to do with the random offering of chocolate when I was trying to buy something else. That’s a standard inertial selling trick, Happens all the time. You go into the shop for a paper, some petrol. You come out with two litres of water and an acre of chocolate you hadn’t intended owning.

No, what I hadn’t understood was the “medical student” reference. I am no-one’s idea of a medical student. I mean I have fantasies of jumping out of a Médecins Sans Frontières helicopter with a girl on one arm, a medical bag on the other and my stethoscope blowing in the wash from the rotors. Which middle-aged, overweight underachiever doesn’t? But the fact remains that I look like what I am: a crossword compiler in an almost permanent state of semi-abstraction.

It was only that night as I was getting ready for bed that I realised I was wearing my Miskatonic University Medical School t-shirt and everything became clear.

Score one to Senga.

It is one of a series of geeky movie shirts I own. Others include an Amityville Police Department shirt (from Jaws), a Nostromo crew member shirt (from Alien), a Summer Isle shirt (from The Wicker Man) and a HAL 9000 Logic Memory Systems shirt (from 2001: A Space Odyssey). They are fabulous. Visit http://www.lastexittonowhere.com for a look at the full range available.

Miskatonic University Medical School is not a real establishment. It is part of H.P. Lovecraft’s complicated fictional supernatural milieu in his Chthulhu stories. I think the Miskatonic library is where the fabled Necronomicon was to be found. And the medical school was where Herbert West carried out his infamous re-animation experiments.

When I was in my teens I read every single word H.P. Lovecraft published, and I’m sad to say that apart from a general recollection of lurking dread, old gods and men driven mad by things no mortal mind can encompass I can’t remember much about them.

The thing about Lovecraft, I feel, is that his legacy is far greater than anything he actually wrote. There seemed in his work, and this is just my adolescent recall at work here, to be a very high paragraph to incident ratio. It all seemed desperately over-written to me, though I did plough through hundreds of pages of it. Perhaps I should revisit it as an adult.

The people who have carried Lovecraft’s torch from his ridiculously early death (aged 46 in 1937), and there are a lot of them, have provided a great deal more entertainment to me. Stephen King’s reverent mythos stories and Ramsey Campbell’s elegant English transpositions are fabulous.

Stuart Gordon’s movie adaptations of the 80s (and this is where my t-shirt comes in) are also tons of fun. Miles away from Lovecraft’s sombre, perhaps po-faced, narrative idiom the Re-Animator movie trilogy and From Beyond nevertheless remain true to Lovecraft’s core theme that there are things lurking just beyond our perceptive threshold that mean us harm. It’s a deliciously creepy idea.

Working at the same time as Lovecraft (the 1920s and 30s) was another fantasy writer called Robert E. Howard. He ploughed a different, but adjacent, field did Howard, but in his way he shook fantasy literature as seismically as Lovecraft did. He can be as difficult to read too for a contemporary audience, sadly. He died even younger than Lovecraft, in 1936 aged only 30. Didn’t stop him having a hell of an influence though.

Howard’s best-known creation today is the genre-defining Conan the Barbarian, uncomplicated, battling hero of a series of fantasy stories set in the mythical Hyborian Age.

There were other characters though including the splendid Solomon Kane, Puritan foe of demons and witches in Elizabethan England.

I was only peripherally aware of Kane as a character, not having read any of the stories he appears in, but was delighted by the recent movie adaptation. It stars James Purefoy (in my head most famous for not being in either Goldeneye or V For Vendetta) and has a brilliant supporting cast including Pete Postlethwaite, Alice, Krige, Jason Flemyng and Max Von Sydow. The fantasy England that provides the setting is convincingly evoked and, whilst I could have done with a bit more Witchfinder General and a bit less Van Helsing, it is a film which nevertheless left me in good cheer. It fits one of the cannot-fail formulae for me: a guy in a hat fighting monsters. There will be more I hope.

Curiously Solomon Kane is the third film in recent months set in a highly fantastical historical England to feature Max Von Sydow. It is the best of the three, and the sputtering misfire that is Ridley Scott’s Robin Hood is, by orders of magnitude, the worst. Not Ridley’s fault at all, mind. Just a centrally compromised script combined with the fact that nobody seemed to be in charge of saying, “Hey Russell, please will you stop doing that voice. You’re embarrassing us all.”

Occupying the middle ground is the extended cut of The Wolf Man which features a perplexing Von Sydow cameo that lasts maybe a minute. Otherwise The Wolf Man is standard fare: an over-careful re-write of Carl Siodmak’s 1941 script for the Universal horror film of the same name. The script brings nothing new to Werewolf lore and is a slightly uncomfortable conjunction of modern effects work with old-school story-telling.

This is not in itself a bad thing, just highly otiose. In 1981, forty years after the original The Wolf Man, John Landis, neither previously nor subsequently a subtle director, pulled off a considerable coup with his film An American Werewolf In London. It captured the true tragedy of the original in that its hero is an innocent who becomes fatally afflicted with lycanthropy through no fault of his own. But it also deftly contrasted the carnality of the condition with the restricted and uptight nature of Britain at the time.

An American Werewolf In London remains a very good film, still surprisingly involving today and home of a fondly-remembered Jenny Agutter shower scene, and that makes it all the odder that we should take such a massive step back to the values of the 1941 film with The Wolf Man remake. Haven’t we been here before?

Anyway, purposelessness is no crime. And if you’re going to do this then you might as well get Joe “Good with monsters” Johnston to direct it. Benicio del Toro is not as sympathetic an actor as either Lon Chaney or David Naughton, but the film trundles along unflaggingly and the sumptuosity rating is high. 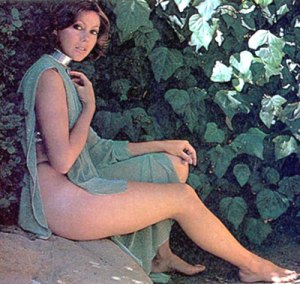